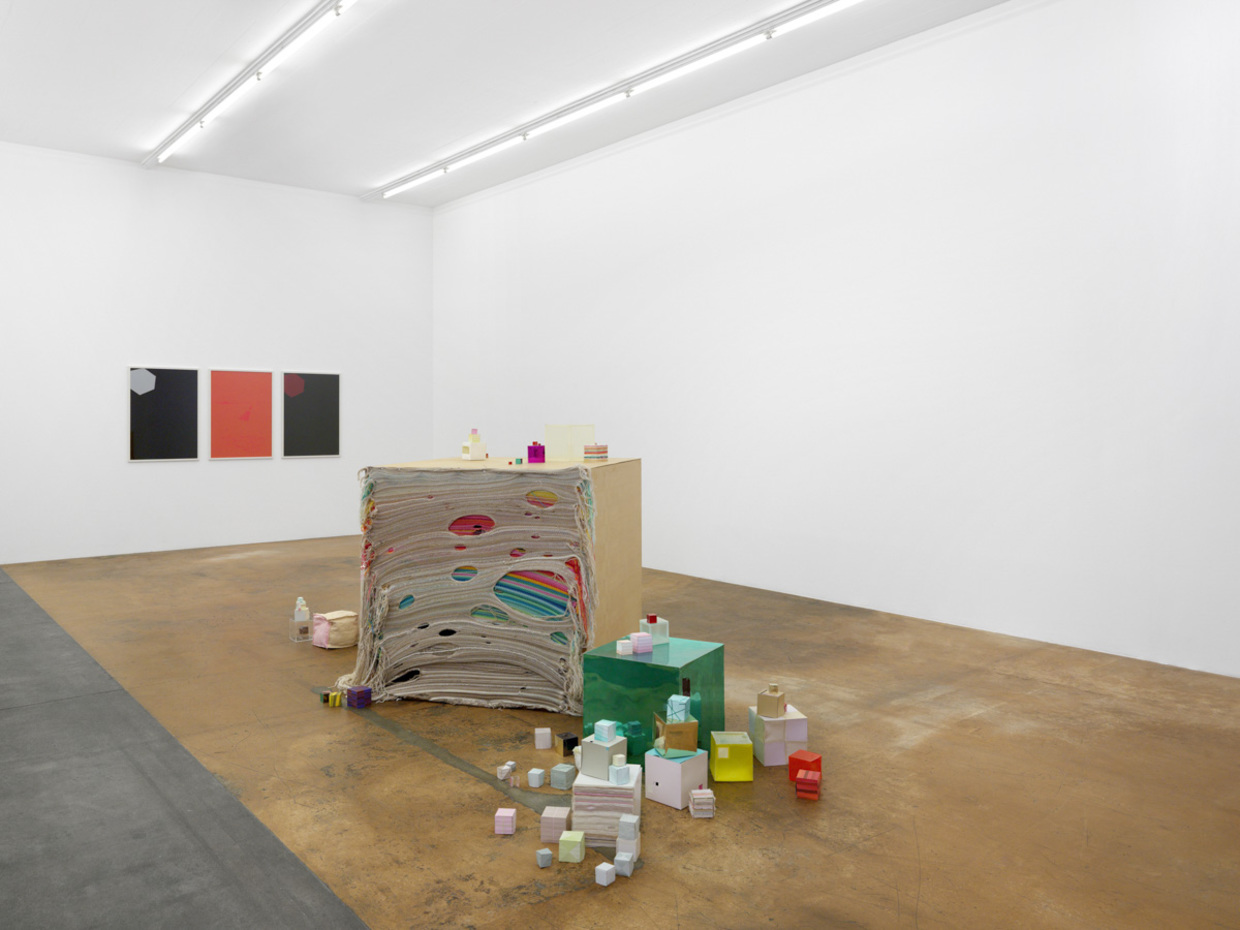 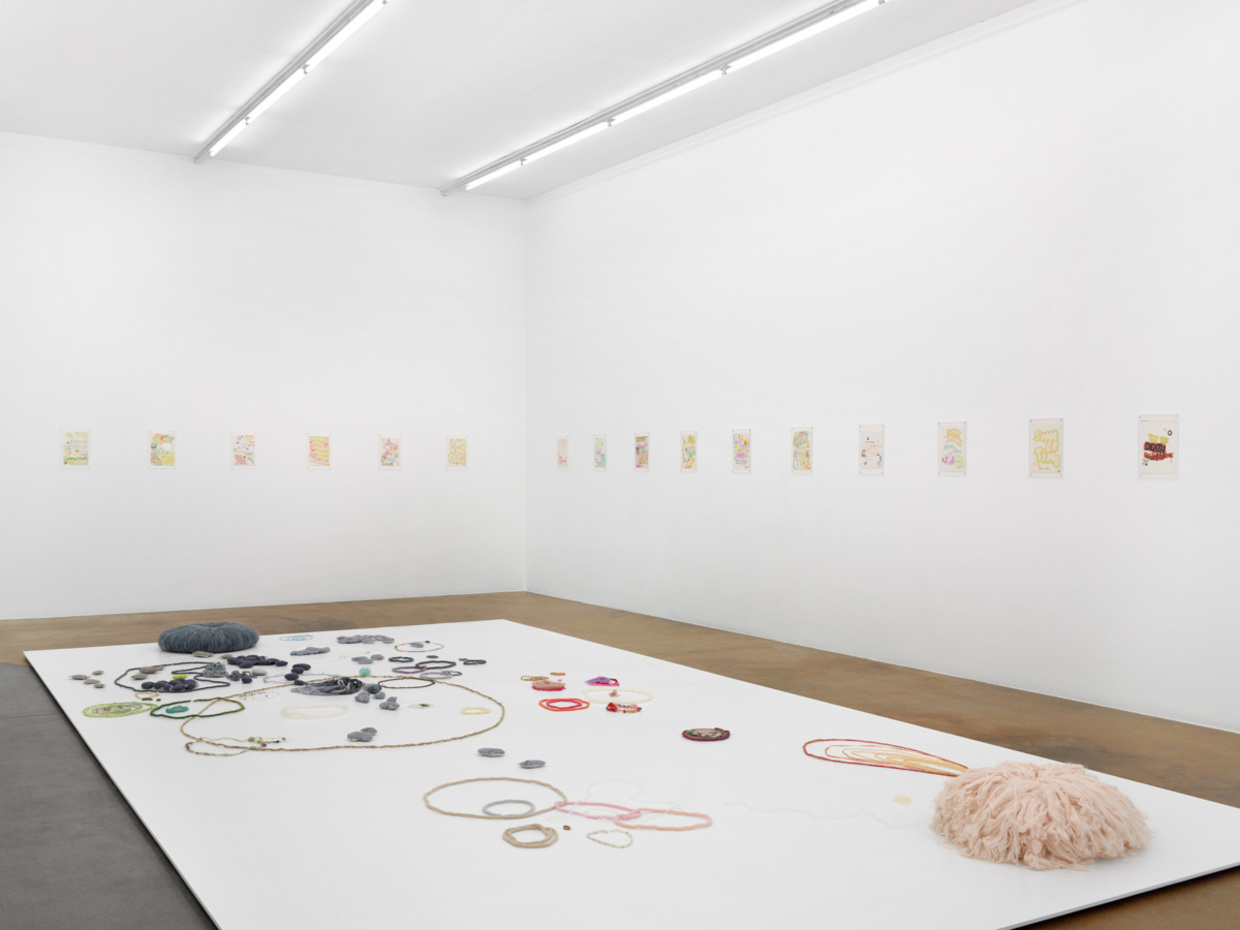 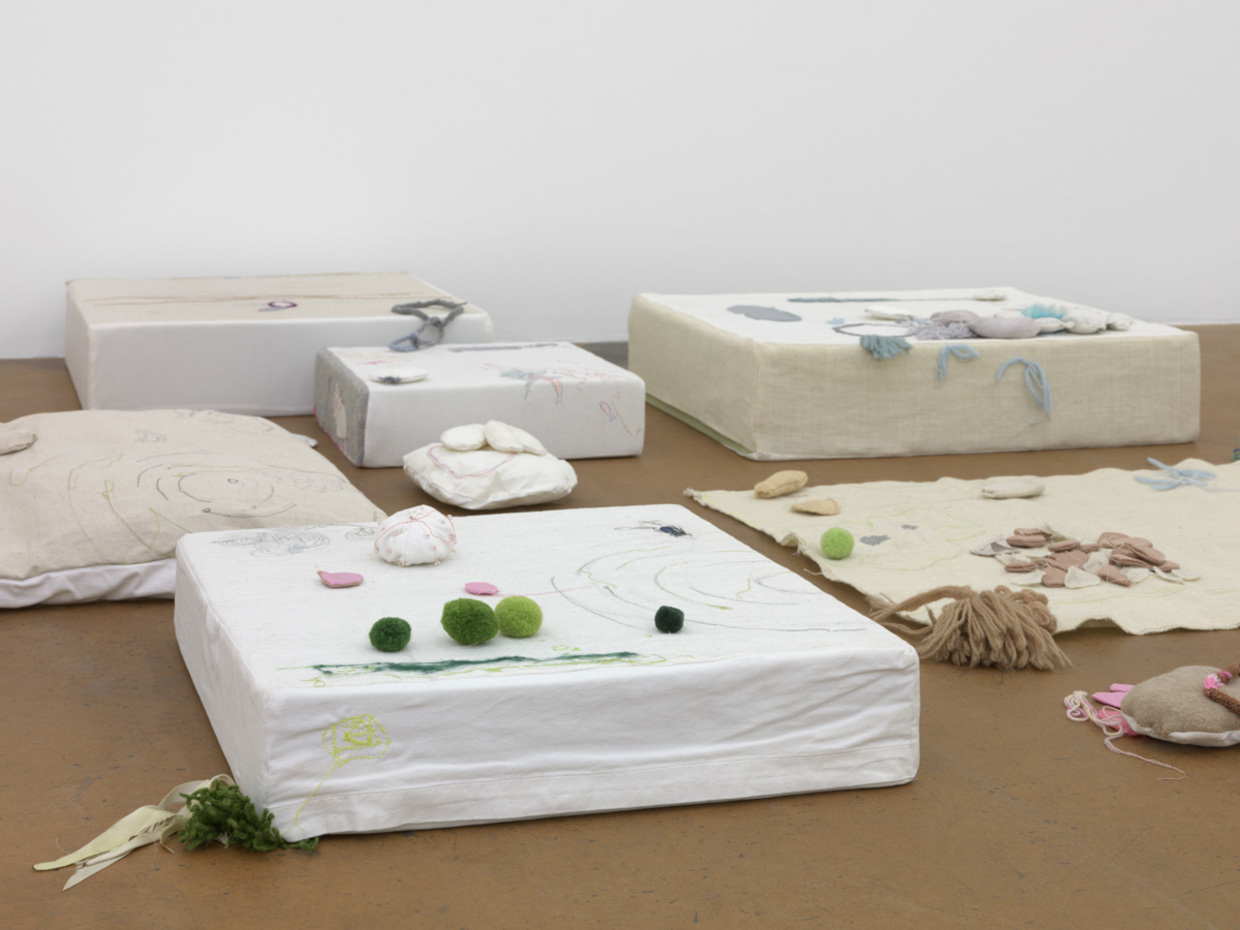 Vidya Gastaldon and Jean-Michel Wicker began working together after they completed their studies at Grenoble’s Ecole des Beaux-Arts and continued to collaborate throughout the 1990s. The range of media they explored included video, drawing, performance, print, and fiber sculpture. This exhibition is based on a donation made by the artists to MAMCO and includes some 20 works on paper and several installations.

The artists’ drawings, produced between 1994 and 1996, are the oldest works in this exhibition. The viewer is presented with a constellation of slogans, brands, names, lists, figures, landscapes, stars, skulls, cacti, bees, etc. The materials used to create them are equally varied—stickers, collages, markers, colored pencils, paint, ballpoint pens, glitter, and so on. Each constituent element retains its specific texture and identity, and links the drawings together, yet without making them a single composition. This sense of fragmentation is as much a reflection of a shared aesthetic agenda as it is the way in which the works were produced. Gastaldon and Wicker would begin drawing individually and then pass the sheets back and forth so that the other could add elements, emphasizing and transforming the existing work. These pieces can thus be understood as transcriptions of a wide-ranging conversation, the main theme of which is the legacy of psychedelic utopias—subsequently commodified by the wellness and fashion industries—and the resurgence of their promise of liberation for the masses through electronic music and rave culture aesthetics. The humor that infuses this dialogue is not so much critical or analytical as it is jubilant and full of desire.

There is also a political dimension to the creation of these works, since the artists’ collaboration did not give rise to a hybrid or fictional authorial figure, but rather remained fluid and elusive. It was a way of divying the artist’s role—a concept the pair continued to develop. It also allowed them to bring in others from their entourage, as they did with their films, created with an ever-changing roster of artists that included, among others, Serge Compte and Christophe Terpan in Grenoble and Sidney Stucki in Geneva.

The textile installations and sculptures from the late 1990s create a similar spatial, perceptual disorder. Politique de l’extase (2000), which takes its title from Timothy Leary, is an installation consisting of knitted wool, beads, silk, pompoms and garlands of melon and watermelon seeds. Are we confronted with a depiction of the infinitely small, at cellular level, or rather a model of the infinitely large, something of a geological or even cosmic nature? Are we dealing with a return to formal and conceptual questions derived from American post-minimalism, or an array of post-hippie decorative elements? Should we focus on each element in its materiality or, on the contrary, on how they interact and the ways in which they define the surrounding space?

Twenty years on, the power of these works to elicit an abundance of sensations and interpretations without ever becoming reduced to a single discursive posture, together with the playful fluidity that underpins their creation, remains radically optimistic.